Each new adventure brings us something. As we shift through the island chain, we shift not just languages, culture, food, but we deal with official-dom. Customs and immigration are the doors to these island adventures that we must pass through entering and departing each island. They hold the keys of who enters and who does not. Entry is always granted, the unknown is with what type of system, attitude, and at what financial cost. Some are really good, some are unique, and others are just inefficient representations of their nations. Having visited most of the islands between the United States and Venezuela on the Eastern Caribbean chain over a period spanning a quarter century, I have seen changes and formed opinions based on personal experiences. Here are some of those experiences ranking from the best to among the worst. We have heard all kinds of stories about Latin American countries and the corruption in their bureaucracies. The stories of safety have filled the headlines and chatter among cruisers, with Venezuela getting the top billing as unstable, violent, piracy and extreme corruption. All this may be true, however, my only experience with this South American oil giant was in 2008 when we took El Gecco, along with two other vessels, up the Orinoco River to meet and interact with the Warro Indian tribe, many settled along the banks of the river, right at a time when President Chavez had given them generators and outboard engines in exchange for votes as he solidified his presidency, and opening their world to the outside for the first time in their history where they could leave easily or see how the rest of the world was living when they hooked a television set to a generator, and were mesmerized. 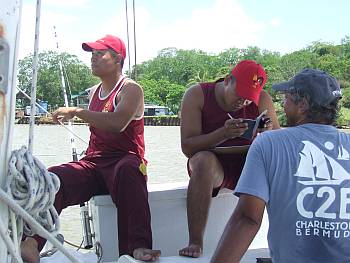 Our point of entry was Perdanales, closest settlement to Trinidad. Our arrival was mid-morning and no sooner did we have our anchor down, when the Gaudia Nationalis arrived in their boat along side, spit polished black shoes as prime reminders of officialdom. Standing in the cockpit in the searing heat, we present our two American passports as we watched our fellow sailors putting down anchor. The more senior of these two young men took our passports, opened them to our picture and information page, and then handed them to his younger assistant who was in possession of a clip board. With pains-taking slowness and details, he began to write down our information, one passport at a time with a pencil. Then they were handed back to the older twenty something official that began to thumb through our well used pages and looked at the stamps, expressionless and unimpressed till he came to the entry stamps of Argentina. His eyes lit up and he spoke the words of Argentina as if he was revering the Pope. “Si” I replied in my only word of Spanish. He said something we did not understand, then using his hand gestures illustrating taking a photo. We interpreted it as do we have any photos of Argentina. Out came the laptop and up we pulled the file of pictures of our one month travel adventure over land in this amazing country. An hour flew by and the tenders from our other two boats arrived wondering what was taking so long to clear us in. The junior official found some speed to record their details as he kept a watchful eye on our computer screens. When we were done with the photos and the rapid entry details, they pointed to our tenders and then to their dock as the place for us to make our South American landfall and headed for their boat. As no bribe or tip was asked for on-board our boat, I assumed that it would be requested at their dock for tying up.

On our arrival at the official’s dock under the cover of a thatched roof and open sides, the men were there to take our painters and secure us. A hammock was strung and on the rickety table was a flask and some shot mugs. Coffee was immediately offered. This bribe was growing bigger I thought. Out of politeness, the cups of coffee were accepted. I passed as I had quit drinking coffee, instead joined the men at a game of dominos, which they allowed me to win. When Darlene expressed how good the coffee was, Spanish words were exchanged and one of the officials took off down the dock. Ten minutes later he returned with 2 bags of coffee, presenting one to Darlene and the other to Peter from our flotilla. The bribe had grown even bigger – or so I thought. When the loosing partners to our game of dominos had let me win enough times, it was time to go for a walk in town. The two officials were trying to say something to us that we had no understanding of, and gave up. Off we went. Half an hour later the senior one found us in town again saying something we could not comprehend, except we figured out he wanted Darlene and I to follow him. We entered a clothing store and wonder between some racks of cheap clothing to the very back, and entered through another door that led into a very welcomed air conditioned bar. So this was going to be our shakedown – I thought. He disappeared through another door indicating for us to wait and returned with a woman who spoke English. “They want you to come have lunch at their base on the dock with them,” she told us. “The fire is ready and they did not want to overcook the fish.” Wary of the generous invite, I asked how much was the cost for lunch and we were told that there was no charge. They welcomed our company as they had never seen three yachts enter the river. We accepted and returned to their compound. 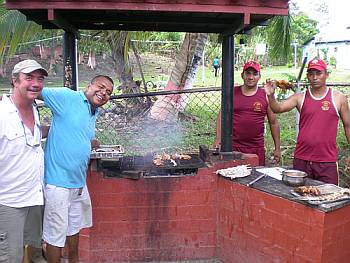 Dominican Republic remains one of the most expensive places to clear in to with a boat. This month we returned as the winds left us no easy option to come north, and cleared in at Samana Bay. The port office charges our boat US$35 and then immigration charged $43 for the boat entry and $10 per passport for a total of $98. If we take all the other ports we cleared in at over nine countries, the collective sum total was way less than this single clearance. As we are leaving our boat, we had to pay an additional $15 each to clear off the boat with some bullshit stamp in our passport allowing us to pass through the airport.

In the Dominican Republic ports that we visited, there were no boats, no tourists and everyone hunting for a gringo victim to get money off. This country no longer has a need for a Department of Tourism, as tourism is substantially on the decline. The airlines are rightfully cutting flights and raising ticket prices.

We met one tourist who was paying about $160 per 8 hr for a taxi that spent less than 3 hrs of the time driving. In Santo Domingo he went walking and was invited into a bar by the owner who said he was happy to make a new friend and would he like a drink. The two had a regular sized beer, before being joined by two friends of the bar owner. The tourist asked what the price of the beer was before ordering and was told by the owner not to worry as he was going to take care of the guy. When it came time for him to leave, the bar tender presented the tourist a bill for 5 beers. The take care of my friend price was US$75. Yes, your read this correctly…$75.00 Isn’t this a great way to stimulate your economy and keep welcoming visitors and business folks back.

Subscribe to receive news and updates from Neal Petersen. Your email address will not be shared.
↑